The Hydrogen Rainbow: A Spectrum of Opportunity 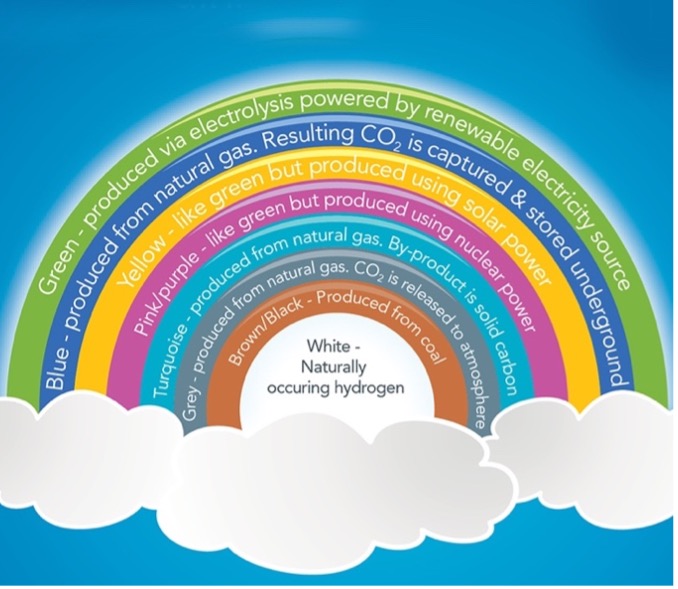 Hydrogen may be a colorless gas, but to industry insiders, hydrogen comes in various colors. Unlike a periodic table, this rainbow doesn’t reflect a scientific property. Instead, it is the key to decoding the environmental savvy of hydrogen sourcing. This prioritization ultimately allows us to rank some companies as more climate-friendly than others.

So who are the leaders, and why?

These forms of hydrogen production are among the oldest and come from coal (brown and black) via gasification. Consequently, they contribute excessive carbon and are a primary transition target more favorable carbon-free emission processes.

Gray hydrogen is more commonly produced today, yet it still contributes to greenhouse gases. This process occurs through steam reforming of natural gas (steam methane reforming, SMR) and produces hydrogen and carbon dioxide. A secondary reaction to increasing the hydrogen yield, the water gas shift reaction (WGS), reacts steam with CO to produce more hydrogen and carbon dioxide. While this method is still a significant contributor of environmental carbon, it is the lowest cost for producing hydrogen and is the industry standard at the moment.

Blue hydrogen employs a carbon capture system to collect and store the carbon emitted from gray hydrogen’s SMR process. The captured carbon is then stored underground, meaning it doesn’t contribute directly to climate change. However, another hurdle with both gray and blue hydrogen: SMR is an endothermic reaction and requires input energy.

Like green hydrogen, pink hydrogen comes from using a power source that doesn’t contribute to greenhouse gases. This method uses nuclear power for either electrolysis or fossil fuel/steam derivation methods. Thanks to a U.S. Department of Energy grant, one company that recently announced its plan to power by pink is Exelon Generation.

A new technology, turquoise hydrogen, has a head start. Backed by Bill Gates and DOE grants, C-Zero seeks to scale up this hydrogen source using methane pyrolysis of natural gas. As a result, there are no carbon mon- or dioxide emissions, unlike in gray hydrogen, effectively merging blue and green hydrogen (below) at a lower cost than green alone. This approach will likely be a dominant form of hydrogen in the coming years and creates healthy competition for green hydrogen.

As the name suggests, green hydrogen is the most climate-friendly approach for hydrogen production. It is produced using renewable energy that powers electrolysis, resulting in a totally carbon-free process. As a result, green hydrogen is the gold standard to address climate change. However, electrolyzer cost, capital infrastructure, transport, and energy conversion losses through phase-change, conversion to electricity, and DC/AC inversion are significant problems for the technical community yet to solve.

Companies using this technology make up a smaller percentage of the current market, but they represent the best hydrogen has to offer. These companies include leaders such as Bloom Energy, Plug Power, and FuelCell Energy.

Are you an industry leader in hydrogen and want help communicating your process? Contact us below!